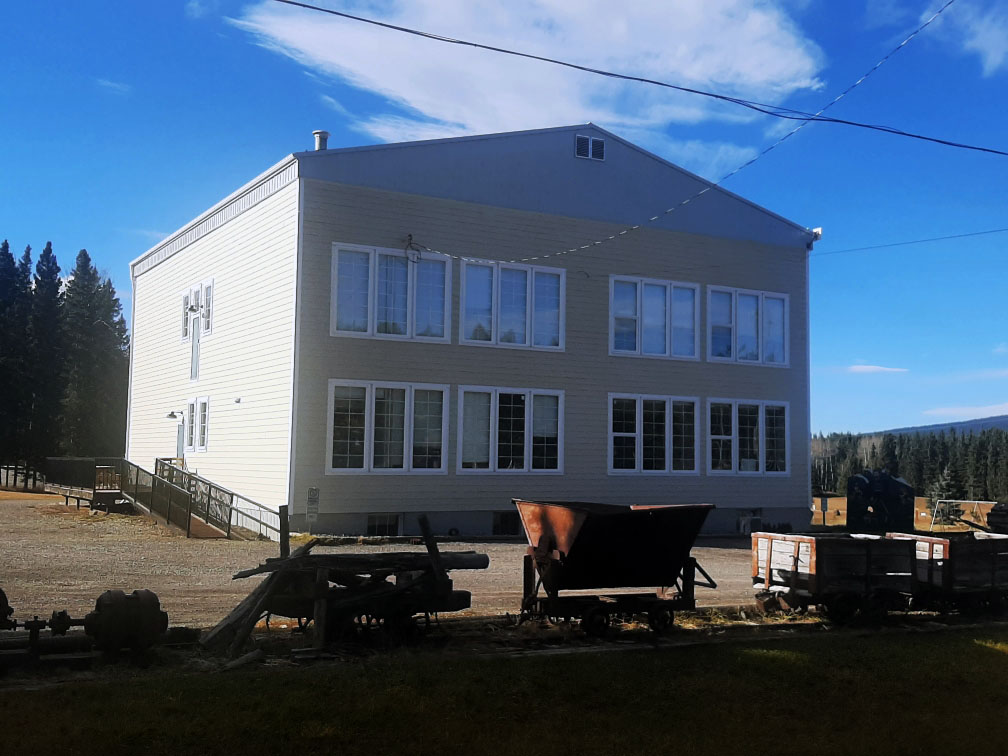 During the summer of 2021, the Nordegg Discovery Centre got a face lift with a new exterior. Prior to installation a test section of the stucco was removed and it was discovered that there was water damage and the walls still contained the original wood shaving insulation.  This changed the project to include replacement of water damaged wood and new insulation throughout.  The finished product is a beautiful exterior with better insulated and a stable structure.

Inside the building you will no longer find the Miners Café and Colliseum Gift Shop as they have relocated. With the vacant spaces on the lower level of the Discovery Centre, Clearwater County has engaged the services of the Hatlie Group to develop a new exhibit.

The new exhibit will be expanded from the original room to encompass the old gift shop room as well. Over the next year there will be workshops held to get a diverse perspective on the exhibit.

If you are interested in participating, have knowledge of the history in Nordegg then we encourage you to reach out to the Heritage Coordinator at heritage@clearwatercounty.ca. It is anticipated that the new exhibit will open in 2024. Included in this project is the mural recreation in an accessible location. Stay tuned for more updates!

Important update: Brazeau Collieries Mine Site Tours are cancelled until further notice (this is no longer due to COVID-19.) As a designated historic resource, and as stewards of the site, it is the duty of Clearwater County to protect this historic resource. Due to the elements, its age, past construction practices, and its location on a slope we required technical expertise, an engineering evaluation of the facility, to be able to develop a strategy for its protection.

We are currently awaiting the completion of this engineering evaluation. The next step will be the development of a strategy for the site that will ensure the safety of both the site and its visitors. Only when we know that we have done what is required for the site and public safety will we be able to give tours.

Please remember that as a National and Provincial Historic Site, Brazeau Collieries has been deemed as historically significant to Albertans and all Canadians. This means we are bound by legislation, we can only permit access on our guided tours, and our goal is for the longevity of the site so that more people can come enjoy and learn from it.

We are happy that you are interested in the site, which we are working towards providing you with that opportunity to visit, but until it is safe, you are not permitted to go on the site.

The briquette plant can be visited on the B Tour of the mine site.
The Brazeau Collieries National Historic Site and the Nordegg Heritage Centre are both managed under the umbrella of the Clearwater County Heritage Board.  This volunteer board advises the Clearwater County Council and Administration on heritage matters throughout the county.
Previously these were managed by the Nordegg Historical Society.  The County became involved with the historical group in Nordegg in 1992. The society was known as the Nordegg Historic Heritage Interest Group at that time, and was experiencing some financial difficulties in their attempts to protect and restore the remaining buildings in town and particularly on the Brazeau Collieries mine site. The Council at the time recognized the significance of the old mine site as an historical resource and consequently got involved. The County appointed a manager to operate the daily affairs of the Society and to look for opportunities to alleviate the debt and resume with the restoration of the site.
Over the last eighteen years, Clearwater County has been involved with the Society, providing management and some resources for the Society to continue in their efforts to restore and stabilize the site. In August 1993, the site was designated an Alberta Historic Resource by Alberta Community Development. In February 2002 the site was designated a National Historic Site by the Minister of Canadian Heritage.  The Nordegg Historical Society and Clearwater County were both recipients of Heritage Conservation Awards from Alberta Historical Resources Foundation in 2007.
This is one of Canada’s largest industrial heritage sites and has stood abandoned since the mid 1950’s. Brazeau Collieries and the Nordegg Town Site thrived during the first half of this century before the trains that used the coal briquettes they produced switched from these briquettes to diesel power. In recent years, the Nordegg Historical Society has been involved with the restoration and stabilization of this site and the many structures still standing there.  Now Clearwater County manages the site with advise from the Clearwater County Heritage Board. 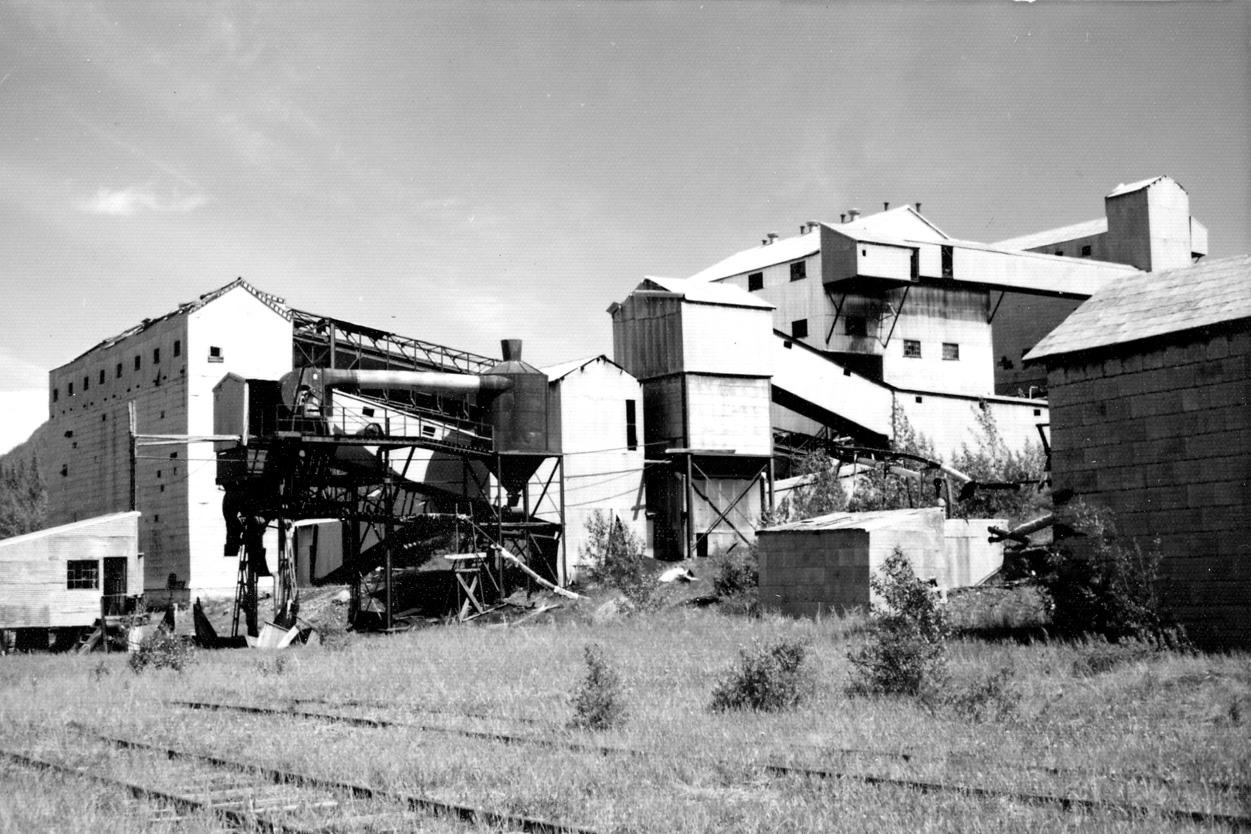 The Brazeau Collieries coal processing plant can be explored on a mine site tour.
The last seventeen years have seen the completion of restoration projects often ranging between one to two hundred thousand dollars per project. The funds are raised through the accessing of various provincial grants, financial contributions from the County and the Town, and dollars raised by volunteers through book sales, tours, and various fund raising endeavors. We work closely with the Alberta Historic Resources Foundation and the mine site was designated as a Provincial Historic Site in 1993. The site was later designated a National Historic Site in February of 2002.
On February 21, 2002 the Minister of Canadian Heritage, Sheila Copps designated the Nordegg coal mining landscape a National Historic Site of Canada. The Federal government had been looking at a number of sites since 1995, particularly in Alberta and British Columbia, which would best exemplify a number of pre-determined criteria. Among those criteria were those which best reflected their association with events that are of national importance, those which best related to the roles of entrepreneurship, technology, Labour, mining community and the state, and those which were exceptional examples of planning and/or technology connected to the development of coal mining.
The Nordegg site was chosen in part as it played a substantial role in the second stage of steam coal development, important in the growth of the coal industry as a whole in Alberta and southeastern British Columbia from the end of the First World War to the mid-1950’s. In addition, the Nordegg site was seen to contain elements relating to mine entries, powerhouse, preparation plant, and rail line, and represents the most complete example of a coal-mining surface plant in the region.
The Historic Sites and Monuments Board of Canada had looked at the Nordegg site twice in the past, in 1985 and 1987 but had not recommended designation. A plaque dedication ceremony was held on July 29th, 2005.
Visitors are invited on the site only as part of a guided tour due to its remote location and the fact that it was an abandoned industrial site.  Visiting the Heritage Museum is by donation.  Group, School and Photo tours are also available; for more information please and to book please contact us.

What is your preferred method to complete a survey?

Todays fire rating is None

Currently, there are no fire advisories in Clearwater County.

During Wildfire Season (March 1 - October 31) if you are within the Forest Protection Area (FPA) you also need a fire permit. Learn more about the Provincial Permit system here: wildfire.alberta.ca/firepermits