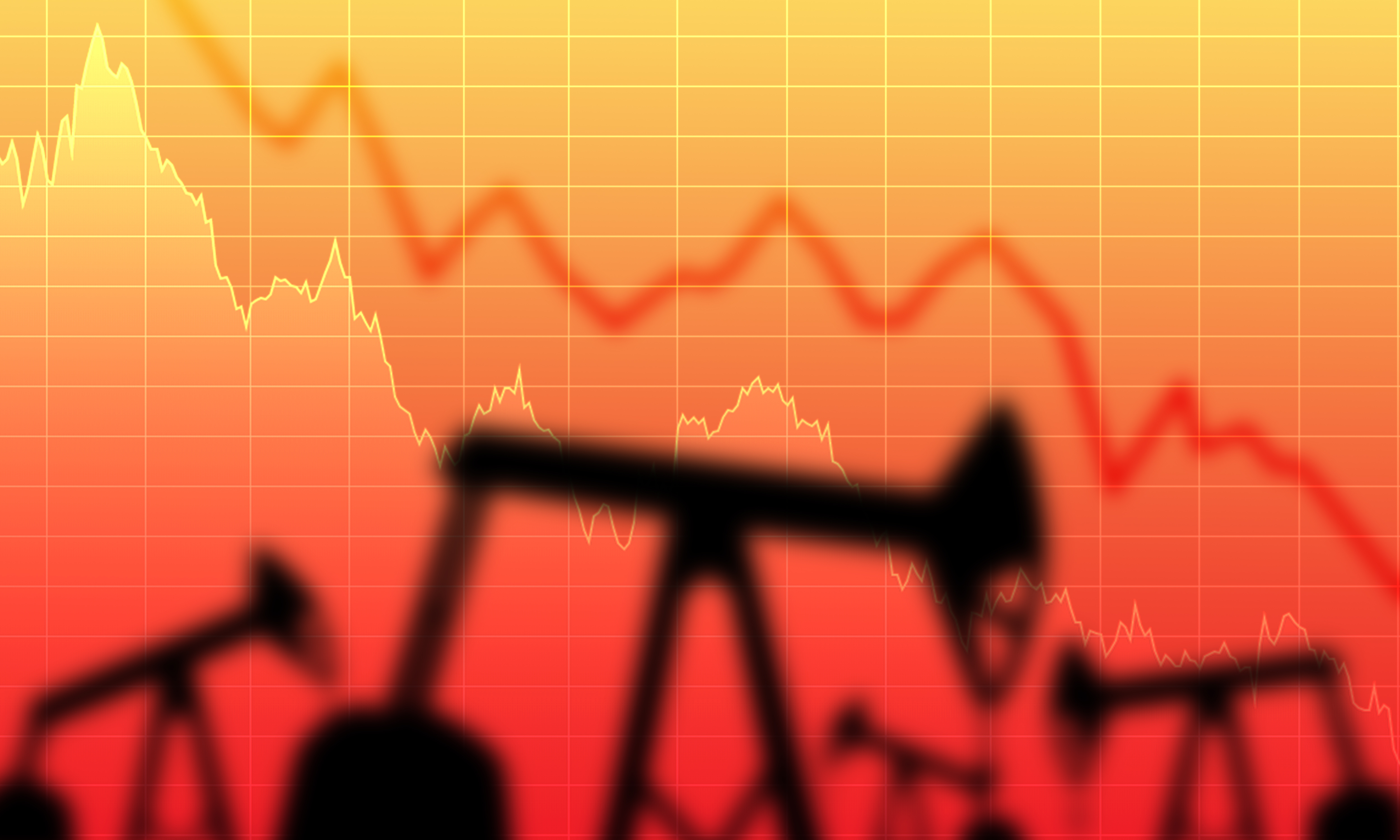 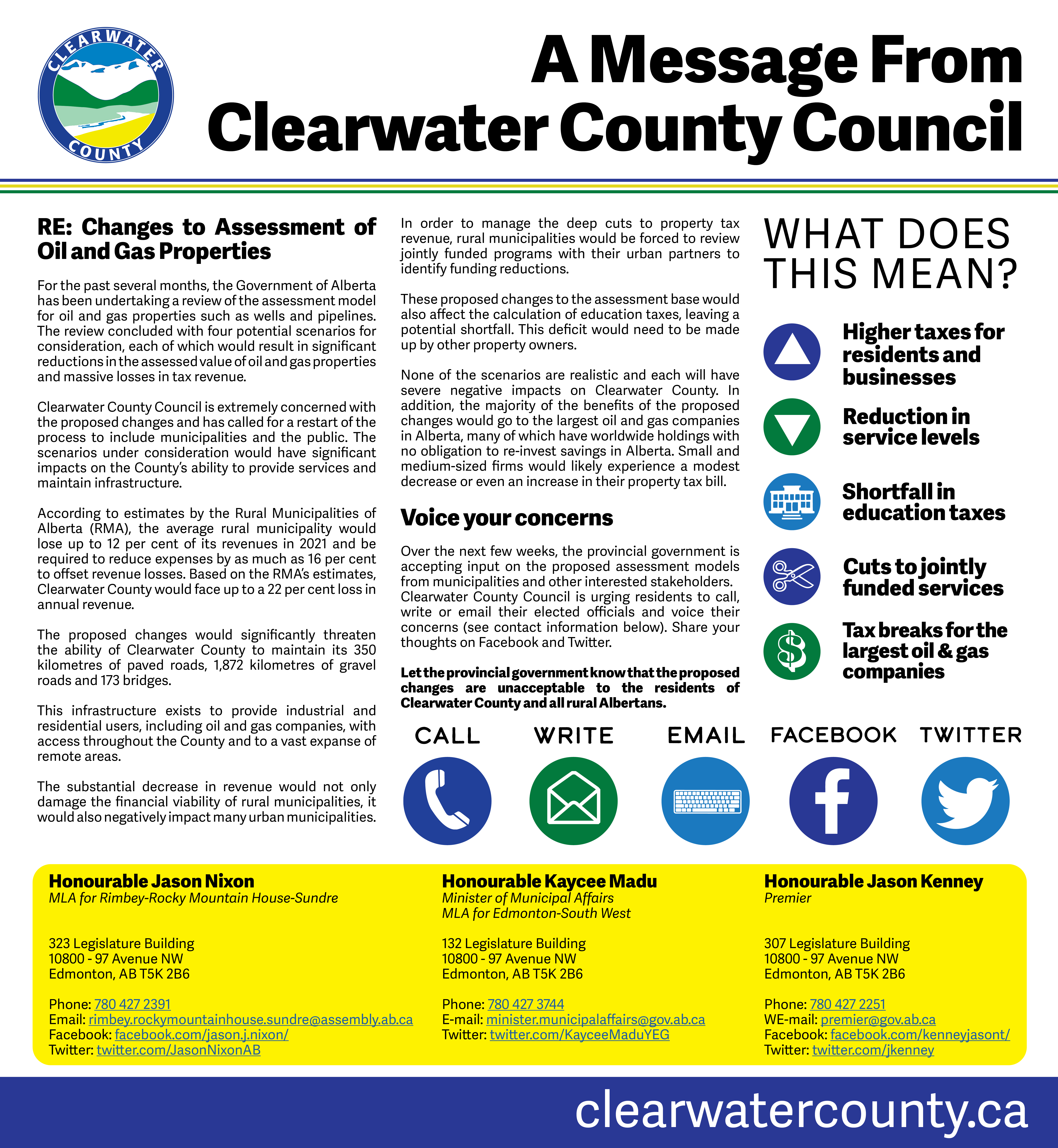 Designated industrial properties are assessed by the provincial assessor. These property types are defined as facilities regulated by the Alberta Energy Regulator, National Energy Board, linear property (wells, pipelines), major plants and land and improvements associated with these oil and gas assets.

For the past several months, the Government of Alberta has been undertaking a review of the assessment model for oil and gas properties. The stated objectives for the model review were:

The review concluded with four potential scenarios for consideration, each of which would result in significant reductions in the assessed value of oil and gas properties and massive losses in tax revenue.

Clearwater County Council is extremely concerned with the proposed changes and has called for a restart of the process to include municipalities and the public (to view the news release click here). The scenarios under consideration would have significant impacts on the County’s ability to provide services and maintain infrastructure. 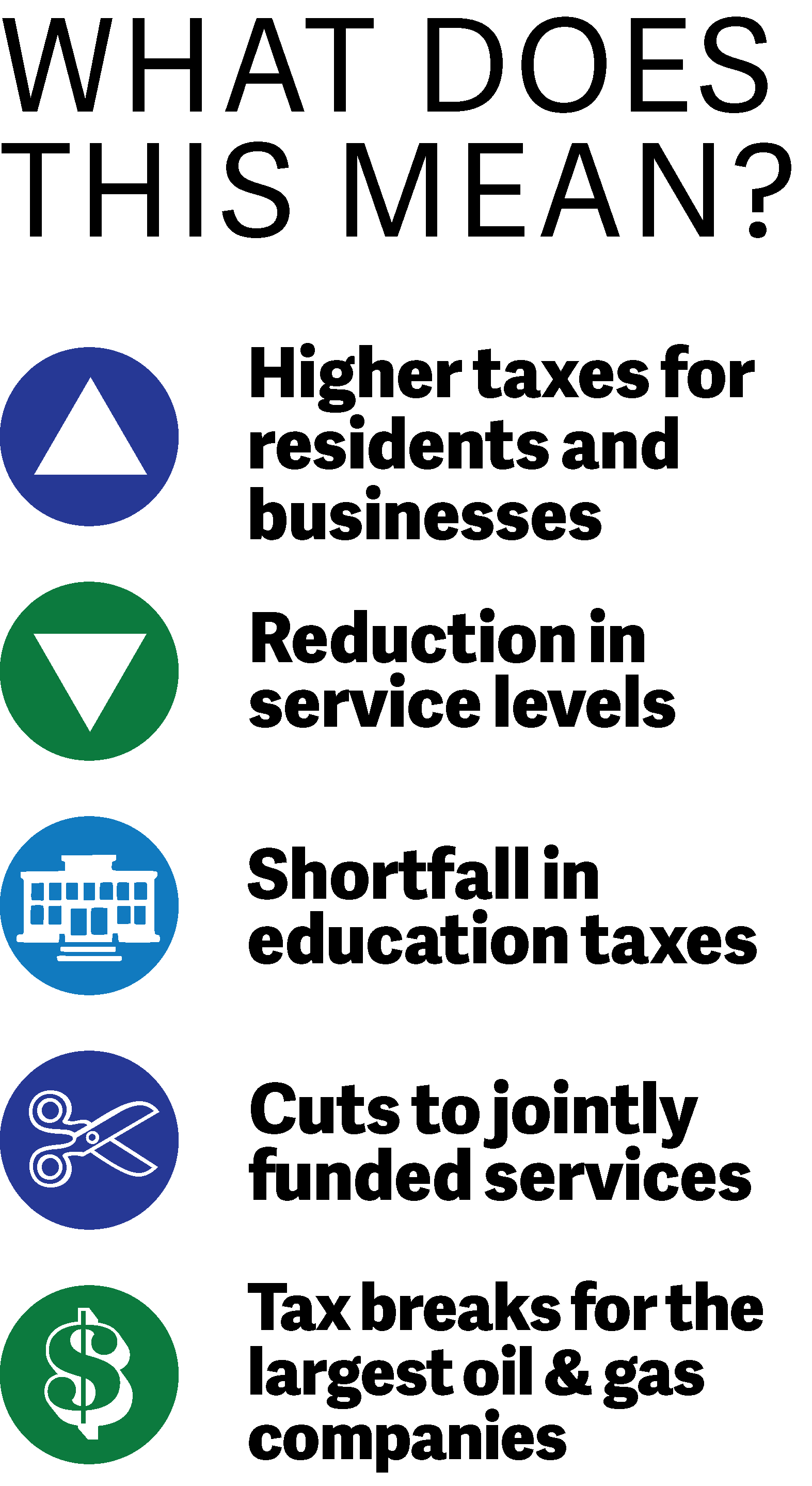 According to estimates presented by the Rural Municipalities of Alberta (RMA), the average rural municipality would lose up to 12 per cent of its revenues in 2021 and be required to reduce expenses by as much as 16 per cent to offset revenue losses. Based on the RMA’s estimates, Clearwater County would face up to a 22 per cent loss in annual revenue.

From an expansive road network to bylaw enforcement to solid waste management, Clearwater County delivers a wide range of services that are essential to a thriving local economy and a healthy community. Many of these services would likely be downsized or eliminated in the absence of substantial tax increases on residential and non-residential properties.

The proposed changes would significantly threaten the ability of Clearwater County to maintain its 350 kilometres of paved roads, 1,872 kilometres of gravel roads and 173 bridges. This infrastructure exists to provide industrial and residential users, including oil and gas companies, with access throughout the County and to a vast expanse of remote areas.

The substantial decrease in revenue would not only damage the financial viability of rural municipalities, it would also negatively impact many urban municipalities. In order to manage the deep cuts to property tax revenue, rural municipalities would be forced to review jointly funded programs with their urban partners to identify funding reductions.

These proposed changes to the assessment base would also affect the calculation of education taxes, leaving a potential shortfall. This deficit would need to be made up by other property owners. 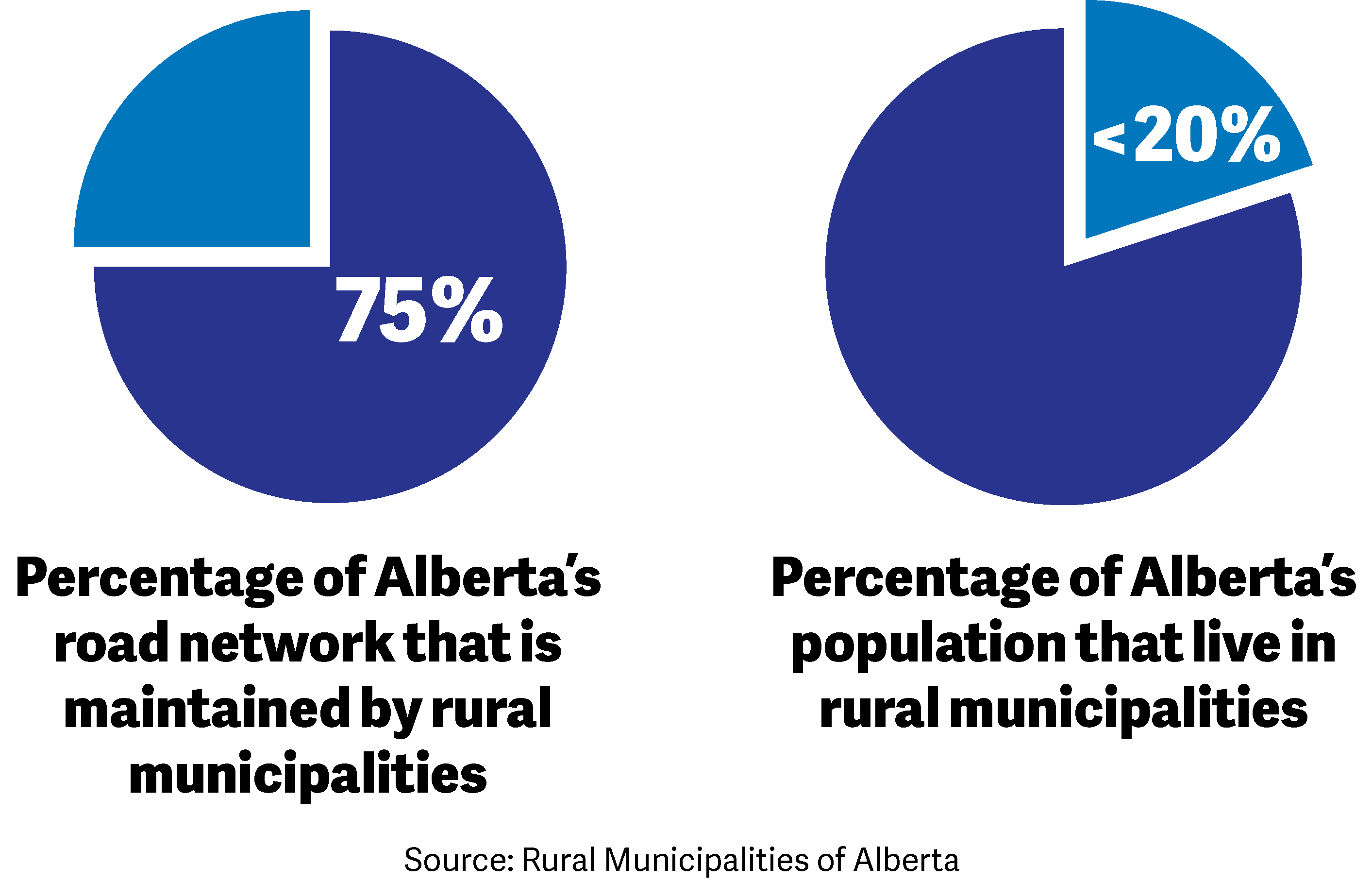 The average rural municipality manages 1,955 kilometres of roads and over 120 bridges. Clearwater County is responsible for 350 kilometres, 1,872 kilometres of gravel roads and 173 bridges. The construction of one kilometre of new road costs approximately $1 million and has an expected life span of over 15 years. After 15 years, an asphalt overlay is likely required at approximately $200,000 per kilometre. 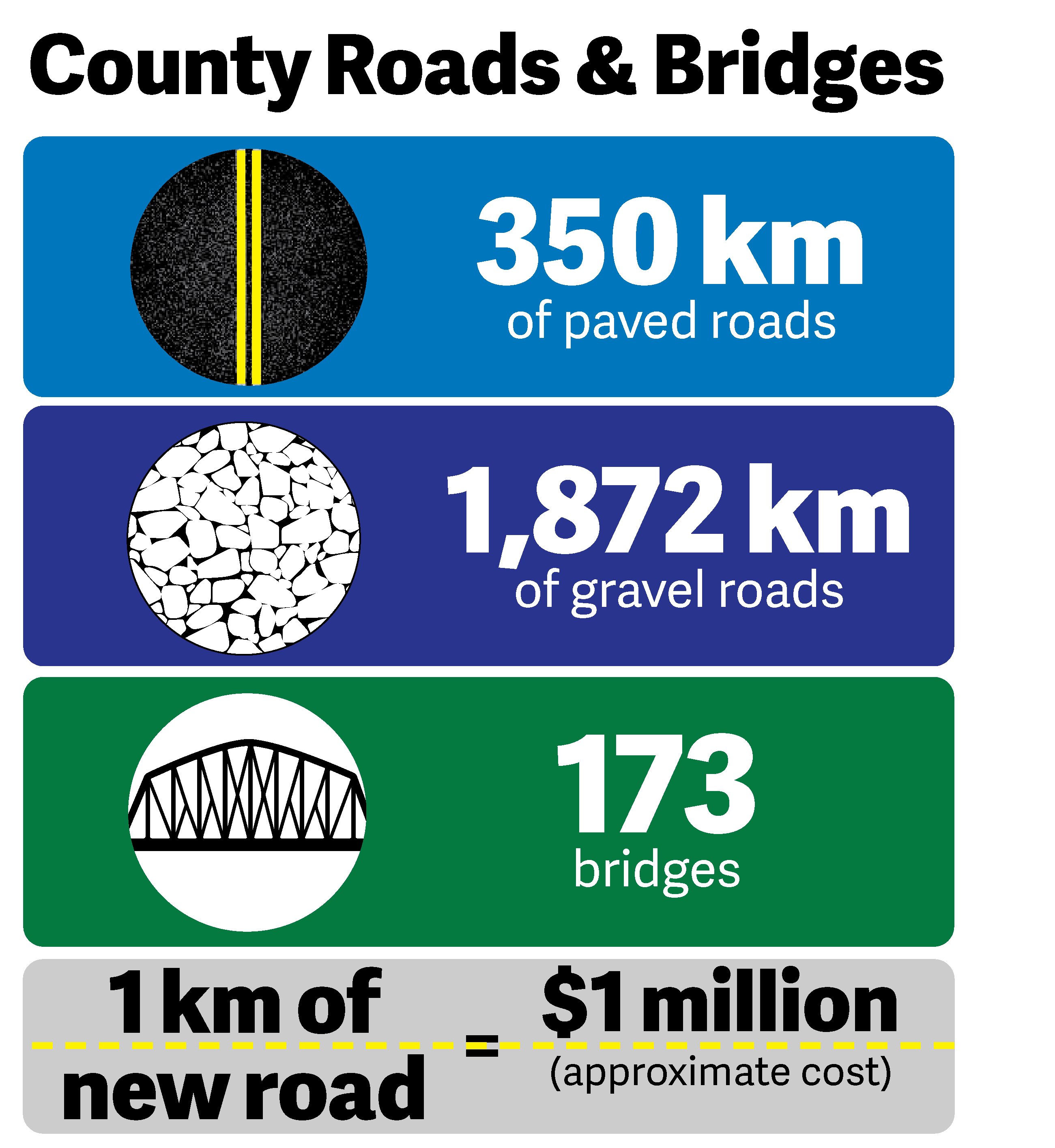 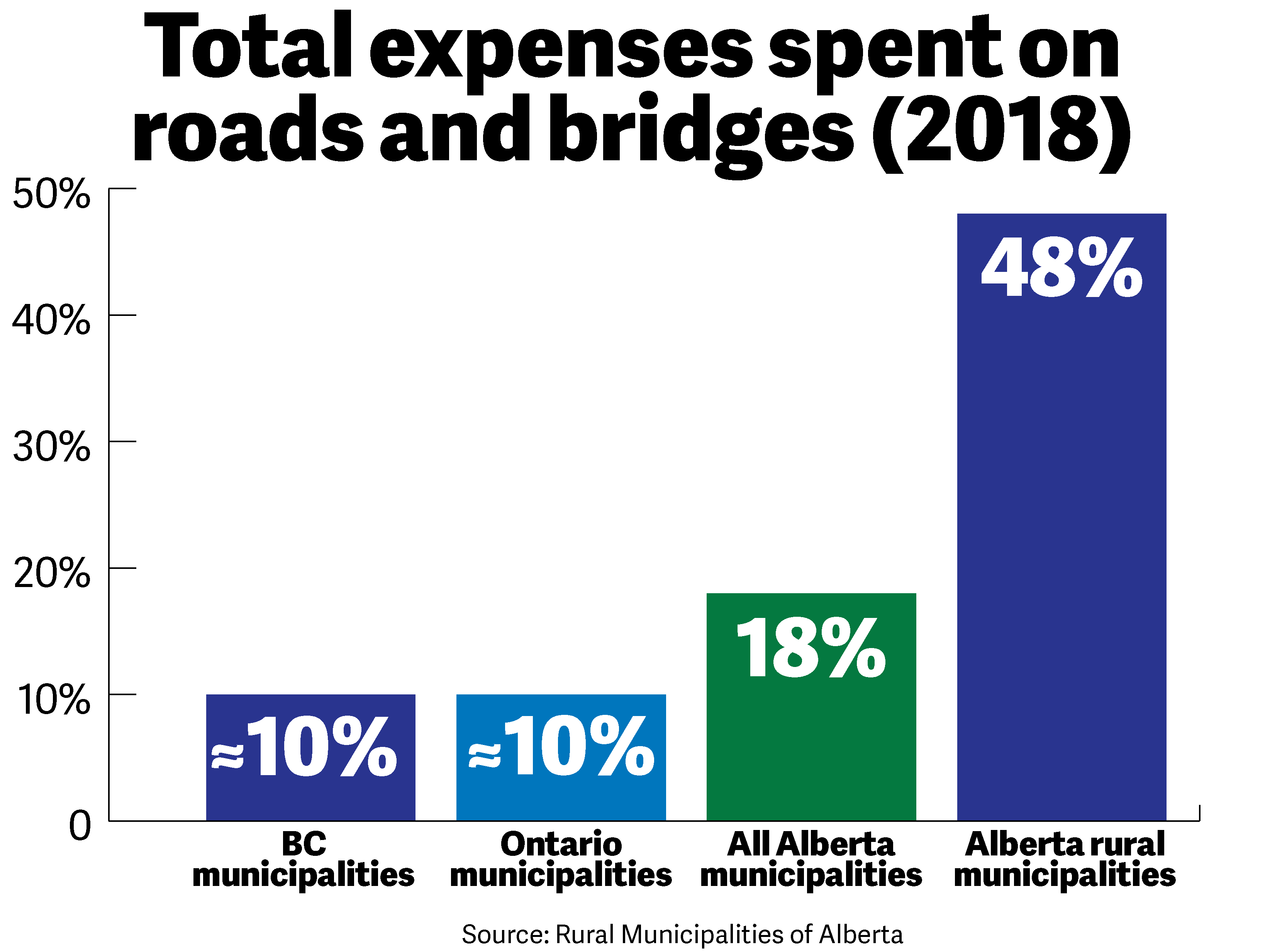 The oil and gas industry is the driving force behind our local economy and rural municipalities like Clearwater County play a key role in supporting the industry. The taxes paid by industry go towards maintaining this infrastructure and other services delivered by rural municipalities, which provide industrial users with access to natural resources.

Clearwater County is committed to working with the provincial government and industry to support struggling oil and gas companies. Possible solutions include tax incentives for industry investments in Alberta and partnerships between the province and industry to encourage investment.

A major reduction in the assessment value of oil and gas property will require our municipality to either lower costs through reductions in service levels, or generate the revenue needed through higher tax rates for other classes to offset the lower values.

Clearwater County is already struggling to recover unpaid property taxes from oil and gas companies. While municipalities are empowered to require most property owners to pay taxes or face penalties or property seizures, these tools do not apply to most oil and gas property. This means that many companies can choose to not pay their taxes without consequences. 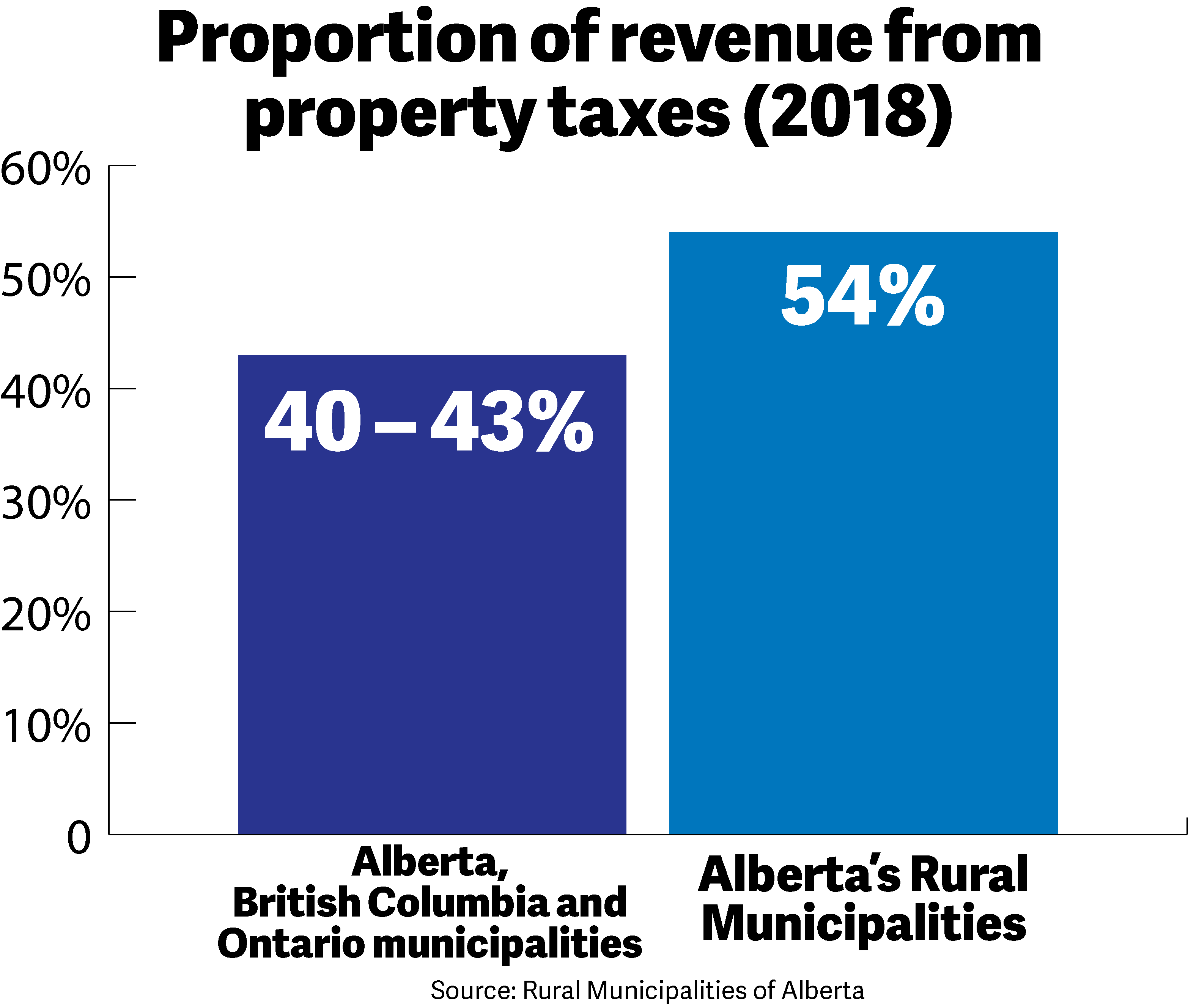 The regulated assessment system is highly complex and not designed to be used to provide targeted support to specific industries or property types. A major weakness of using the assessment model to support industry competitiveness is that the complexity results in widely different impacts on oil and gas companies. The final scenarios recommended to provincial ministers based on the review process will have significantly different impacts on oil and gas companies of different sizes. 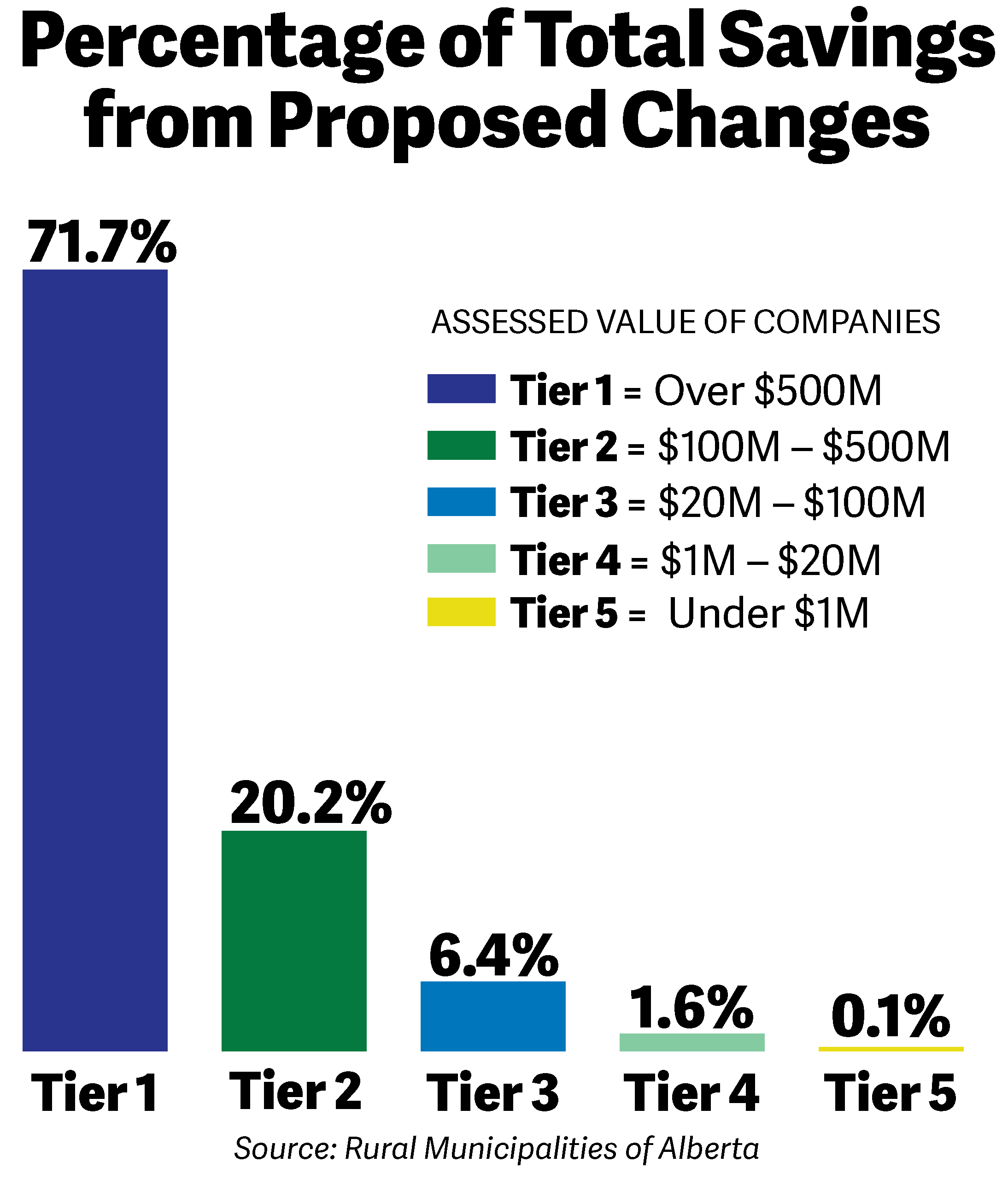 The largest oil and gas companies operating in Alberta will benefit significantly, while the smallest oil and gas companies will, in many cases, face substantially higher assessments. According to estimates, the largest 27 (or 3.6 percent) of approximately 750 companies that own property impacted by the review would receive an estimated 72 percent of the total savings. Many of these companies that will benefit the most from the assessment model review have holdings worldwide and are under no obligation to re-invest savings in Alberta. The proposed changes would likely result in commercial property owners and residents making up the difference. In effect, businesses and residents in rural municipalities would be subsidizing a property tax break to the largest oil and gas companies. 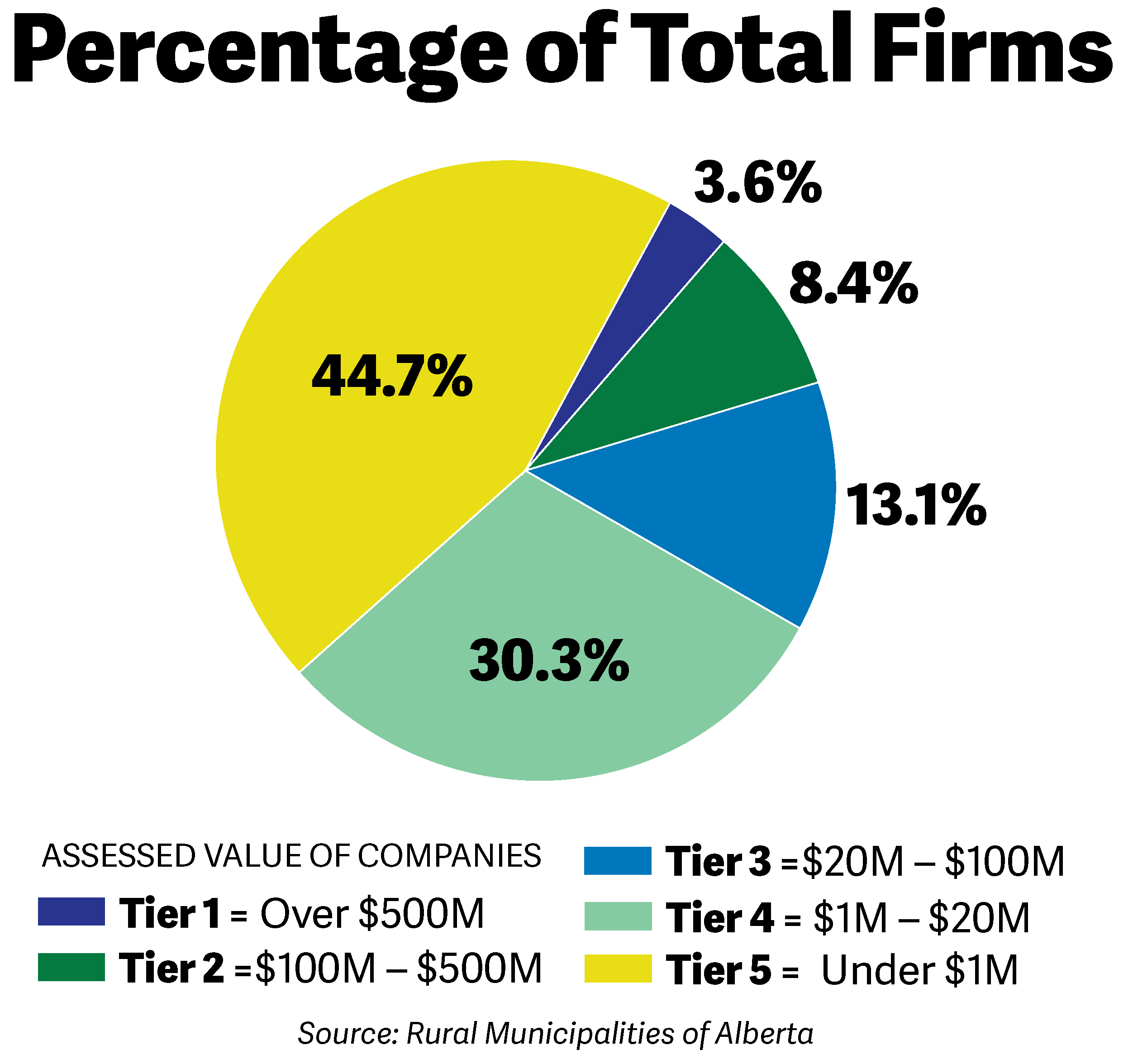 Given the magnitude of the implications, Council is urging that the provincial government start over with a new framework based on broad consultation. Without consultation from municipalities and adequate information to guide decision-making, the existing process will fail to produce a sustainable solution.

Over the next few weeks, the provincial government is accepting input on the proposed assessment models from municipalities and other interested stakeholders. Clearwater County Council is urging residents to call, write or email their elected officials and voice their concerns (see contact information below). Share your thoughts on Facebook and Twitter.

Let the provincial government know that the proposed changes are unacceptable to the residents of Clearwater County and all rural Albertans.

Sign an online petition sponsored by the Rural Municipalities of Alberta (RMA) urging the provincial government to cease any proposed changes to the assessment model that will negatively impact the revenues and services of all rural municipalities in Alberta. Click here to sign the petition.

Why is the Government of Alberta reviewing the existing assessment model for oil and gas properties?

The Government of Alberta is undertaking a review of the assessment model for oil and gas properties as part of ongoing efforts to enhance industry competitiveness. The review concluded with four potential scenarios for consideration, each of which would result in significant reductions in the assessed value of oil and gas properties and massive losses in tax revenue.

What does this mean for residents and businesses of Clearwater County?

Higher taxes and lower services. The proposed changes would force the County to either drastically increase property taxes on residential and non-residential properties or significantly scale back the current level of service delivery. According to estimates by the Rural Municipalities of Alberta (RMA), Clearwater County would face up to a 22 per cent loss in annual revenue.

This revenue funds current programs and projects throughout the County. It also funds programs shared with other local municipalities which could be jeopardized. If the proposed changes were implemented, the County would be forced to significantly scale back the current level of service delivery and raise residential and non-residential tax rates.

How will this affect the local oil and gas industry?

It is unclear that the changes will enhance the competitiveness of Alberta’s oil and gas industry. According to estimates by the Rural Municipalities of Alberta (RMA), up to 54 per cent of small oil and gas companies (with assessed assets less than $100 million) could actually face an increase in their assessment.

Meanwhile, the largest oil and gas companies (with assessed assets over $500 million) in Alberta would receive a disproportionate share of benefits. Many of these companies have holdings worldwide and are under no obligation to reinvest savings in Alberta. While large oil and gas companies would receive large tax breaks, small- and medium-sized firms would likely experience a modest decrease or even an increase in their property tax bill.

How would this affect my property tax bill?

For residential and non-residential property owners, property taxes would likely rise. A reduction in assessment will force municipalities to make a range of revenue-generation and spending changes, including raising tax rates on residential and non-residential property classes. Essentially, the tax burden would be transferred from the oil and gas industry to residents and other businesses. For households and businesses, this could result in owners paying higher property taxes and receiving reduced levels of service.

Based on the various potential scenarios being considered by the provincial government, Clearwater County may be required to increase non-residential tax rates toward the maximum ratios currently allowed under the Municipal Government Act. This would take away some of the competitive advantage the industry is looking for while also resulting in higher taxes for other non-residential properties outside of oil and gas.

How will this affect services?

The proposed changes would ultimately lead to a combination of increased taxes on residential and non-residential properties and a sizable reduction in services. In order to manage the deep cuts to property tax revenue, rural municipalities would be forced to review jointly funded programs (libraries, community non-profit organizations, etc.) with their urban partners to identify funding reductions.

How can I voice my concern?

Clearwater County Council is urging residents to call, write or email their elected officials and voice their concerns. Share your thoughts on Facebook and Twitter. Let the provincial government know that the proposed changes are unacceptable to the residents of Clearwater County and all rural Albertans. Council is requesting that concerned residents and businesses call, write or email their comments to the offices of the MLA for Rimbey-Rocky Mountain House-Sundre Jason Nixon, the Minister of Municipal Affairs Kaycee Madu and the Premier Jason Kenney to express their views on the proposed changes.

Learn more about my taxes

Find out about road bans

Know if there is a fire ban

Buy a lot in Nordegg